Why You Plateau and Procrastinate and How to Solve it!

How to do you master business, leadership, management, and your career? Why are you procrastinating and not motivated (hint –you’ve hit a plateau!) I show you the three pillars of mastery, along with how to apply it. You’ll see why 99% of people struggle and make zero progress. It’s pretty obvious once I draw it out why it is. And eventually why eventually every single person hits rock bottom and crashes/burns. You’ll get high-level tools to help you avoid this.

You can get my free team building game that more than 3,000 people have used including many leading companies like Google, Amazon, E&Y, Oracle, Microsoft, and others. http://www.cardsagainstmundanity.com

Check out my individual and group coaching options at https://jasontreu.com/services. You can try it out with a single coaching session as well.

10x Your Company Performance Through Caring

The fastest way to increase revenue, profit, and satisfaction isn’t through training it’s through better relationships.

“The researchers found out what distinguished the ‘good’ teams from the dysfunctional one was how teammates treated one another. This was much more important than even if all the members were exceptionally bright.”

It starts with team building.

Get my free breakthrough game that 3,000 people and 50+ organizations (Google, Amazon, Microsoft, Oracle, PRSA Dallas, Interview Connections, etc.) are using, Cards Against Mundanity. It’s simple to play and comes with all the instructions. It takes five minutes to set up and delivers a huge ROI immediately afterward.

Here’s a testimonial from Google senior leaders on my workshop two weeks ago in NYC: “The workshop and game were excellent: the team was very appreciative of the event, and it kept coming up as one of the best experiences they’ve ever had. As a manager, that was great to hear. Throughout the following two days, we hosted some guests from other groups, and we asked them to answer random cards in front of the audience: some of their answers were surprisingly deep and instantly helped to establish trust between them and our teams.”

#1 Question to Ask Your Boss Every Week

THE #1 question to ask your boss every single week is, “What is your single greatest priority this week?” How your boss answers it will help you prioritize and you can offer up suggestions. Think about it: Your boss will go to bat for you if you focus on helping them with their priorities. #management #leadership #careeradvise #successprinciples

PRSA Dallas Presentation on Secrets to Great Teamwork and Collaboration

Here is my presentation at the PRSA Dallas May Event,  “The Secret to Strong Teamwork and Collaboration that Leads to Innovation, Engagement, and Happiness.” We also played my game, Cards Against Mundanity.

Feedback from the head of programming, Jennifer Little, for Dallas PRSA:

Overview of My Speaking Engagement at PRSA Dallas: 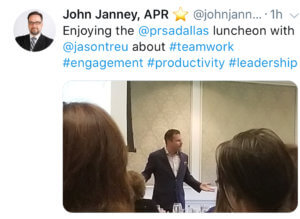 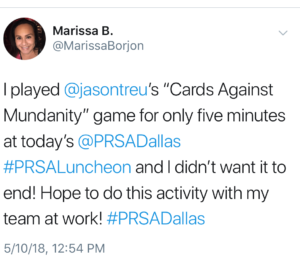 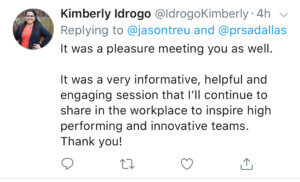 Collaboration is taking over the workplace. With employees spending more than half their time working together, teamwork is critical to organizational success and market leadership. However, according to Gallup, almost 70% of employees are disengaged and it’s costing U.S. businesses $550 billion every year.

After spending three years interviewing more than a thousand individuals, including leaders and teams in Fortune and Forbes Top 10 Workplaces, Jason Treu has discovered specific strategies and activities any organization can do to quickly increase engagement and performance as well as work better with internal and external teams.

Join us for the PRSA Dallas May luncheon to hear how teambuilding and strong group connections can lead to productivity, exciting innovation and job happiness. This session will help change and improve the way you work with any team and is ideal for any communication setting including agency, corporate, nonprofit, government and consultants. 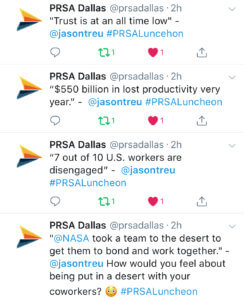 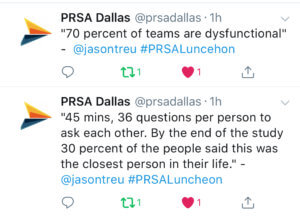 How to Get Employees Engaged at Work

Jason Treu returns to Vroom Vroom Veer for episode #3 to talk about how to get people to like and trust each other at work, a fun game called “Cards Against Mundanity” and a little bit about self-awareness.

“You know those times when everything lines up perfectly and you want to pump your fist and yell, “YES!!!”? We all have those brief moments when we’re at our best. Everything flows powerfully and naturally. We’re like Michael Jordan shooting the ball into the hoop. Like Adele hitting that impossible note.

Most people reach that place infrequently at best. They spend their entire life searching for it, just to keep hitting dead ends. I’ve solved this. When you work with me, “peak state” becomes your normal state. I help top people like you smash through goals, build extraordinary relationships and become a leader who easily hits the high notes and makes the shots.”