When Empathy Can Kill Your Career

Can empathy really hurt your career? Read this and let’s see what you think.

“Ken was a mid-level manager at a recruitment firm. Folks saw Ken as a “good guy.” He was well-liked by his employees and on good terms with upper-management. His team felt comfortable confiding in him; they often used his open-door policy to share their personal problems.

When Ken got word from upper-management that his team brought in the lowest numbers that quarter, he immediately knew the cause. Caitlin—previously the team’s top-earner—had been off her game for months. Her father’s poor health had caused her to miss work and diminished her productivity and focus in the office. Ansh’s work had also been suffering. Ken knew Ansh had been through a break-up recently and wasn’t taking it well.

In both instances, Ken hadn’t interfered. He knew the company’s bottom-line was being affected, but his empathy for Caitlin and Ansh kept him from giving them critical feedback, crucial for getting them back on track. Ken simply hoped their lackluster results would improve with time. They didn’t. And Ken’s reputation at the firm suffered.

We often talk about leaders who lack emotional intelligence, but a distortion in EI can also go too far in a leader. Empathy is a critical competency for understanding others’ points of view and finding common ground with people whose experiences differ greatly from our own. But great leaders also balance their empathy with strengths in other competencies.

Leaders who have a mindset that empathy does not allow needed feedback may have deficits in related EI competencies, such as conflict management. Ken’s empathy made him well-liked, but his misinterpretation of a leader’s role and what empathy means led him to avoid tough decision-making as well as not giving negative feedback.”

Coleman makes a good point, and opens a much bigger question he didn’t deal with.

If you have a culture of truth-telling, you would avoid the problem Goleman points out.

Actually, I think it’s more conflict avoidance, which is RAMPANT in corporate america.

Empathy isn’t about engaging or not engaging. It’s about understanding another’s viewpoint, being aware of your emotional landscape, mutual vulnerability and it can be used as an interruption of power.

Here is a good podcast on Empathy by Knowledge@Wharton and new book, “I Feel You: The Surprising Power of Extreme Empathy.”

Great leaders don’t avoid discomfort and they consistently engage in difficult conversations. They use empathy as part of their process to understand what’s going on and to get more accurate information.

There are a very small amount of companies who have a culture like this. And I’ve never seen a large organization prioritize enough to make it a reality. This conflict avoidance makes a huge negative impact on the bottom line and key metrics.

What should you be asking? You need to be truth-telling and being direct so you can get more accurate information and dispel stories that hurt your relationships, performance, leadership, and collaboration. Every manager should be asking their employees on a monthly basis,”Rate your work product (customize for your work function & challenge you are focusing on) on a scale 1-10, one being poor and Reb being extraordinary. Why do you give yourself that number (and what data supports that)? What do you need to do differently to move it closer to a 10? What’s preventing you from doing that?”

Read the rest of the above article I quoted here: https://www.kornferry.com/institute/feedback-performance-management-emotional-intelligence

Keynote Speaker at the Logistical Labs Customer Conference in Chicago 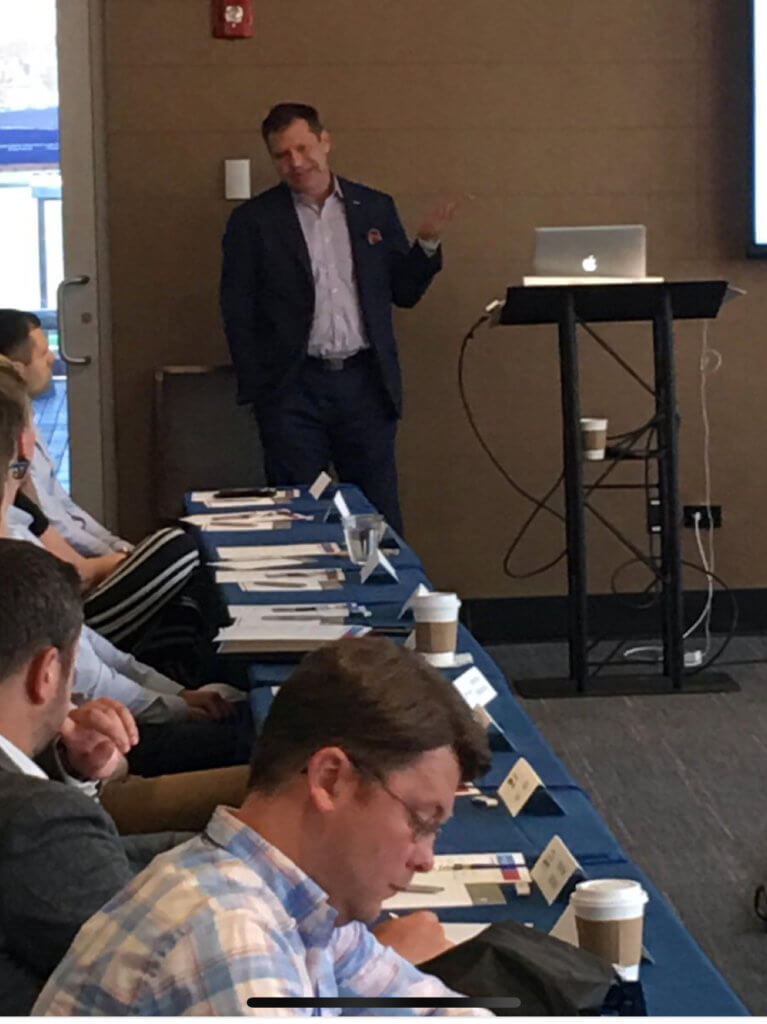 I had a fantastic time last week speaking on building the highest performing teams at the Logistical Labs Customer Event in Chicago. We also played my game, Cards Against Mundanity, a team build game where participants share their life experiences through questions and answers in small groups from 4 to 12 people. It’s similar to Cards Against Humanity, but more fun, more vulnerable, and more about your life. It’s amazing to see how animated people get, their voices getting louder, everyone leaning in, smiles on their faces, and it’s hard to get them stopping talking!

They were a great inquisitive group of managers and leaders from across the United States that cared deeply about serving their clients and organization.

Logistical Labs, makers of LoadDex, are the SaaS platform for collecting, analyzing, and acting on supply chain data. With their suite of analytics products, users can make better informed pricing and quoting decisions through data-driven insights and social collaboration. Open API access allows users to easily integrate products into their existing business applications for improved process efficiency. Logistical Labs was named a Top 100 Logistics IT Provider by Inbound Logistics in 2018.

How to Conduct a Great 360 Degree Review (My article in HR.com)

360-degree feedback programs have received a lot of negative (and justified) attention over the last few years. Even Dilbert has parodied the process.

Recently, a client said, “I can’t wait to do another 360 degree review that tells me what I already knew and provides me with very little meaningful insights.”

However, 360-degree feedback done right can be a very valuable process that significantly influences teams and organizations. It provides an outside perspective into an individual’s (often unconscious) habits and behaviors that sabotage their success.

These are areas such as an inability to compromise, conflict avoidance, micromanaging, poor communication or collaboration, etc.

Why Should You Do a 360-Degree Review?

According to Dr. Tasha Eurich, while most people believe they are self-aware, only 10% to 15% are. Self-awareness is very rare quality for a person to have. So most people walk around not understanding the true impact they are having in their organization.
There are three main reasons for this:
Therefore, receiving external feedback is extremely important in helping people understand what they are doing, thinking and feeling and the effect it has on those around them. Armed with this information, individuals have a much higher chance of creating critical behavioral changes.

Unfortunately, the 360-degree process is broken today and needs to be changed.

Click here to read on to How to Conduct a Great 360 Degree Review from my article in HR Magazine (Hr.com).

“The workshop and game were excellent: the team was very appreciative of the event, and it kept coming up as one of the best experiences they’ve ever had. As a manager, that was great to hear. Throughout the following two days, we hosted some guests from other groups, and we asked them to answer random cards in front of the audience: some of their answers were surprisingly deep and instantly helped to establish trust between them and our teams.”

Testimonial for my Team Building Workshop at the Hispanic Chamber of Commerce in Fort Worth.

“Our group of ambassadors enjoyed your team building presentation and excited to try the game with their team/organization.

After having a conversation with Jason, I immediately felt like a friend of his. Jason is passionate about helping others not only reach organizational goals, but personal goals as well.  As a recent college graduate, I am always seeking ways to grow as a young professional and Jason gives great advice on how to do so. I am excited to get my hands on Jason’s best-selling novel, Social Wealth.”

“Do you want to get to the next level? Jason’s Team Building Workshop will help you open doors in your life, that you never knew they were there! Thank you again for coming out this Wednesday. We are so excited to have you come out again.”